O.T.B.O. MEMBER DR. JOEL POLITI WINS KENTUCKY OAKS
Serengeti Empress became racing’s “Queen for a Day” when she made every pole a winning one in the $1,250,000 Grade 1 Longines Kentucky Oaks. Owned by Dr. Joel Politi OF Columbus, Ohio, Serengeti Empress pushed her career earnings past the million-dollar mark in this historic race. 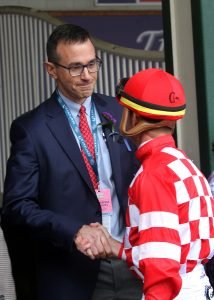 Dr. Politi didn’t just jump in the racing game when he signed the $70,000 ticket for the daughter of Alternation at the 2017 Keeneland September Sale on the advice of trainer Tom Amoss. “My dad my parents are both immigrants. I’m first generation. My dad grew up in Egypt, loved going to the track. They migrated through Europe to wind up getting over here, Politi recalled at the post-race press conference. He was a physician, and once he got settled, he went to the track, and we had some $1,500 claimers at Waterford Park and that’s how he got going. And I was at the track all the time. And we bred and he built a barn in the backyard, a 12 horse barn. And we got 25 cents a day to feed them in the morning, and we were out there all the time, and on the weekends, we went to the track. So, it was a passion of my dad’s that I loved, and so it was a joy, a treat for me to go to the track. I have been going since forever, and here we are.”
After winning the Grade 2 Rachael Alexandra in her front running fashion she was installed as the odds-on favorite in the key Kentucky Oaks prep – the Grade 2 Fair Grounds Oaks. She led the field for the first half of the race but stopped quickly after that by Jockey James Graham when she began to bleed and was vanned off. In the weeks ahead trainer Amoss had her treated and methodically brought her back to her form.
Amoss was not about to put her in the 1 1/8 mile Oaks unless he was 100% sure that she had responded to the treatments. He put her condition to the test, not once, but twice in two workouts at Churchill Downs and she recorded “bullet” efforts at 4 and then 5 furlongs. Both times she returned to the barn as fit as she could be, with no signs of bleeding and the green light was on for the Oaks. 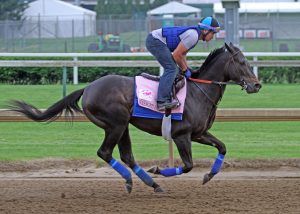 Serengeti Empress days before the Oaks.

Despite having to break from post 13, racing luck was with her at the break and she cleared the talent-laden field inside of her to secure position along the inside under the guidance of Jose Ortiz. She was challenged by Liora in mid-stretch, but repelled that effort to hit the wire 1 3/4 lengths in front at odds of 13-1.
Dr. Politi reflected on his decision to send his filly to the barn of Tom Ammos. “So, I’ve known for a long, long time I already said it I think Tom is you know, the best is a very subjective thing. Tom is amongst the elite in getting horses ready. And then he went to the sale and bought Mo Tom a few years ago. Anybody remember Mo Tom? He went to the sale and bought Lone Sailor a few years ago? Anybody remember Lone Sailor, right? I talk to Tom all the time. One of my favorite things to do is go to the barn and look at all of his horses for fun. You can see what he’s got, and he has got an eye and he has proven it repetitively. And she is the empress of proving it, right?
No timetable has been set since the Oaks for the rest of her season, but we wish Dr. Politi nothing but the best. While Serengeti Empress is a Kentucky-bred, look for Dr. Politi to be active here in Ohio soon as he purchased an Ohio-bred Take Charge Indy filly out of the 2018 O.T.B.O. Mixed Sale.

DERBY DAY DAILY DOUBLE FOR HAMM STABLE
Within one minute, Tim Hamm trained horses captured the two Ohio Stakes scheduled on May 4. At Belterra Park the gates flew open at 3:54 pm in the $75,000 Tall Stacks and Kenny McPeek-trained Sister’s Creed (a $70,000 Fasig-Tipton yearling purchase) showed early speed, just as she had in her debut at Keeneland. Jockey Luis Colon was intent on laying a clear second on Diamond Dust behind the leader until they came out of the turn in the 6 ½ furlong test for 3-year-olds.

Asked for more, last year’s Juvenile Champion swooped by the pacesetter and quickly gained a two-length lead. Colon gave Diamond Dust a hand ride to the wire outlasting 27-1 longshot I Wanna Win who caught Sister’s Creed in the final yards. They covered the distance in 1:18.15 over a muddy sealed track.
“He works harder than any horse I’ve had,” commented Hamm. “He went alongside Kenny’s filly and looked her in the eye and just took off.”
Diamond dust is owned and bred by WinStar Farm and Blazing Meadows Farm, He is by Paynter out of Radiant Sky by Awesome Again. The win in the Tall Stacks pushed his career record to 8-6-2-0 for earnings of $283,000.

At 3:55 they sprung the latch for the 6-furlong T.F. Classen Memorial at Thistledown. Multiple state champion Leona’s Reward was selected as the morning line favorite, but the betting public made Mike Rone’s talented sprinter True Cinder a heavy odds-on choice after having a race under her belt versus open allowance company. True Cinder had won half of her 10 sprint starts for $204,250. Leona’s Reward on the other hand, had won only one race at the distance in a 38-race career – that race was last year’s edition of the T.F. Classen Memorial. “The short route is not her game, but she is a tough mare,” Hamm admitted. “She had a good winter in Florida and it was time to get her going. She won this race off a layoff last year.”
Breaking from the inside on the fast track was Edge of Pleasure who took the early lead with True Cinder in pursuit and Leona’ Reward never far behind. The pace quickened as they rounded the turn and True Cinder took a short lead over Edge of Pleasure with Leona’s Reward only a head behind the top two. It made for an exciting final furlong while True Cinder drifted to the five path to lead by a length. Scott Speith astride Leona’s Reward went even wider while switching to a left-hand stick and got up in the final strides while True Cinder finished only ¾ of a length over Edge of Pleasure. 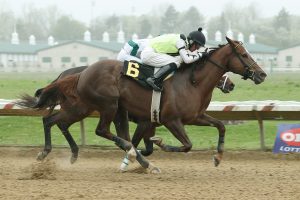 Put win number 15 in the books for the hard knocking 6-year-old mare and boost her bankroll to $723,606. Leona’s Reward is owned in partnership by Michael Friedman and Blazing Meadows Farm and was bred by Blazing Meadows Farm. She is a daughter of Ohio stallion Parent’s Reward out of Prime Time Dancer by Montbrook.