ALTISSIMO SMOKES ‘EM ON THE GRASS IN CINCINNATI
Ohio’s 2018 Horse of the Year checked off another box in his storied career on June 8 in the $75,000 Sydney Gendelman Memorial Handicap. He won the 1 1/16th mile race by 8 lengths last year, and while pleased with the result, trainer Richard Zielinski was disappointed that the race was taken off the turf.
The weather cooperated at Belterra Park this year and the 6-year-old gelding got to race over the greensward for the first time of his career and while the surface was different, the result was the same with a wire to wire leisurely win. Breaking from the 8 post in a full field of 12 he increased his lead at every point of call under regular rider Christian Pilares in 1:40.99. Cape Rojo, making his stakes debut, put in a strong five-wide bid to clearly gain the second spot over Gliding Alone. 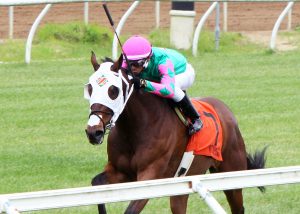 Surprisingly, the betting public made former two-time Ohio Horse of the Year Mo Dont No the 4 to 5 favorite even though he finished second to Altissimo in the Babst/Palacios Memorial on April 27. “Mo” checked at the 5/16th pole and re-rallied to finish fifth. Altissimo, a poster boy for soundness is owned by Nancy Lavrich and Ronald Zielinski and was bred by Lavrich and Niknar Farm LLC. Now 6-years-old, Altissimo pushed his career earnings to $564,388 with a record of 35-15-4-4.

PROPER DISCRETION PASSES THE $ 500,000 MARK IN MACKEY/ ANGENORA
There was little left to doubt after the gates opened in the $75,000 6-furlong Michael G. Mackey Memorial Memorial Angenora Stakes at JACK Thistledown on June 1. As a matter of fact, you could have stopped the race after 50 yards as the field never changed positions to the wire. 2 to 5 favorite Proper Discretion and Scott Speith pulled away quickly to win with ease by 9 lengths in 1:10.68. Multiple stakes winner True Cinder held off a stubborn Ali Blue throughout for the minor placings. 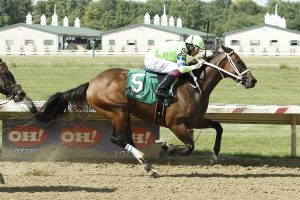 For the Jeffrey Radosevich trainee, there is no place like home. The 6-year-old mare has 15 lifetime wins – 13 of those at the North Randall oval and 10 at six panels. Owned by Ron Paolucci Racing LLC, Proper Discretion has now bankrolled $534,741. The muscular mare is a daughter of Discreetly Mine out of Prizes by Prized and was bred by Bruce Talisman.

ALAN SOBOL BACK IN THE RACING GAME CAPTURES THE GREEN CARPET
If the name Alan Sobol rings a few bells in your racing memory it should. So should the name of multiple Ohio Champion Writin’ Mama, Best of Ohio winner Portentum, graded stakes winner Big Bamboo and Ohio standouts Donnavega and Athenavega to name a few. When the purses began to spiral downward prior to full-card simulcasting an the advent of Racinos in Ohio, Sobol moved into the world of corporate business. He was very good at his job, maybe too good. After he brought back two slumping companies to prominence they were sold. He didn’t go to the races back then, but it was always in the back of his mind.
“Last October I started intently watching the Ohio races on the internet and came up with a list of 20 horses that I wanted get for some younger investors who had disposable income. I reached out to several breeders and ended up getting ten from Dr. George Sikora to train,” said Sobol from his home in Chagrin Falls. “Manga Man (not to be confused with another Ohio-bred currently racing – Magna Man) was one of the horses on my list and I bought him privately for a client in New York. He had conditions left and I thought we could win the price back with a few good wins.” Sharp thinking and training on Sobol’s part.
Manga Man just missed in his first start for his new owner Martha Borland but quickly covered his purchase price with a “good” win in the $75,000 Green Carpet at 1 1/16 miles on the turf. With Luis Gonzalez in the saddle he was 10th and last after 6 furlongs. They angled out into the stretch and he responded with a quickened stride. In front of him the odds-on favorite and 2018 Ohio 2-Year-Old Champion, Diamond Dust looked to be making the winning move when he ducked in sharply from a right-handed whip and dropped rider Luis Colon just short of the rail (both rider and horse came out unscathed). Manga Man was clear of the incident and went on to win by a length in 1:45.44. Send Me On was bothered by the Diamond Dust incident, but rallied to just catch longshot Danefield for the second spot.
Manga Man is a 3-year-old gelded son of the deceased Ohio sire Kingship out of Sligo Knows by Sligo Bay (Ire) and was bred by Joshua Faulkner. He now sports a record of 13-3-4-2 for earnings of $120, 232.

LIKE MOTHER LIKE DAUGHTER IN $75,000 TOMBOY STAKES
It was a Fair Winds Farm family affair in the Tomboy Stakes at Belterra Park on May 12. Patiently handled by Gerardo Corrales, H. F. Carmel was asked to wait to make her move and then quickly slipped through an opening along the rail to draw off by 4 ¼ lengths. Her dam, Flip Side by Devil His Due won the race just in front of two other Fair Winds raised horses over a decade ago. Dr. Harold Fishman, the father of Lori Williams (who operates Fair Winds with her husband Kim) arranged the matings. The 2019 edition for 3-year-old fillies was scheduled for 1 1/16th miles on the turf, but rains moved it to the sloppy main oval. Despite three scratches, a field of ten went to post. Undefeated Absorb was favored but had to break from the outside post and was rushed into the first turn, Totally Obsessed, who was 3 for 3 this season was coming out of a win in the $75,000 6 furlong Southern Park Stakes at Mahoning Valley and led just ahead of Absorb for ¾ of a mile. About that point, the two pace setting favorites were passed by H. F. Caramel, Market Success and Drillit for the same order of finish at the wire. 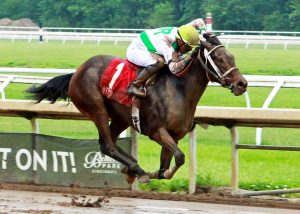 The Tomboy was only the second start of 2019 for H. F. Caramel. Trainer Mike Rone wisely put her in a solid prep for this race finishing a troubled 2nd against older allowance competition on April 17 at Mahoning. H.F. Caramel is a 3-year-old daughter of Revolutionary and is owned and bred by Dr. Harold Fishman covering the sloppy surface in 1:47.27. With her win in her stakes debut, she now has earned $73,730 from only five trips to post.