OHIO BRED CAPTURES GRADE 2 AT BELMONT AND IN STATE STAKES

OHIO-BRED HEAVENHASMYNIKKI CAPTURES GRADE 3 $200.000 VAGRANCY HANDICAP AT BELMONT PARK
Leading every step of the way, Heavenhasmynikki outlasted a very talented field in the Grade 3 Vagrancy Handicap at Belmont Park on May 11. Breaking on top in the 6 ½ furlong test, she first repelled a challenge from the favored Separationofpowers – winner of $772,500 including the the Grade 1 Test and Frizette Stakes. She extended her lead to three lengths into the stretch and when challenged by three-time graded stakes-placed Pacific Gale “mustered up enough gameness to preserve the decision,” according to the Daily Racing Form. 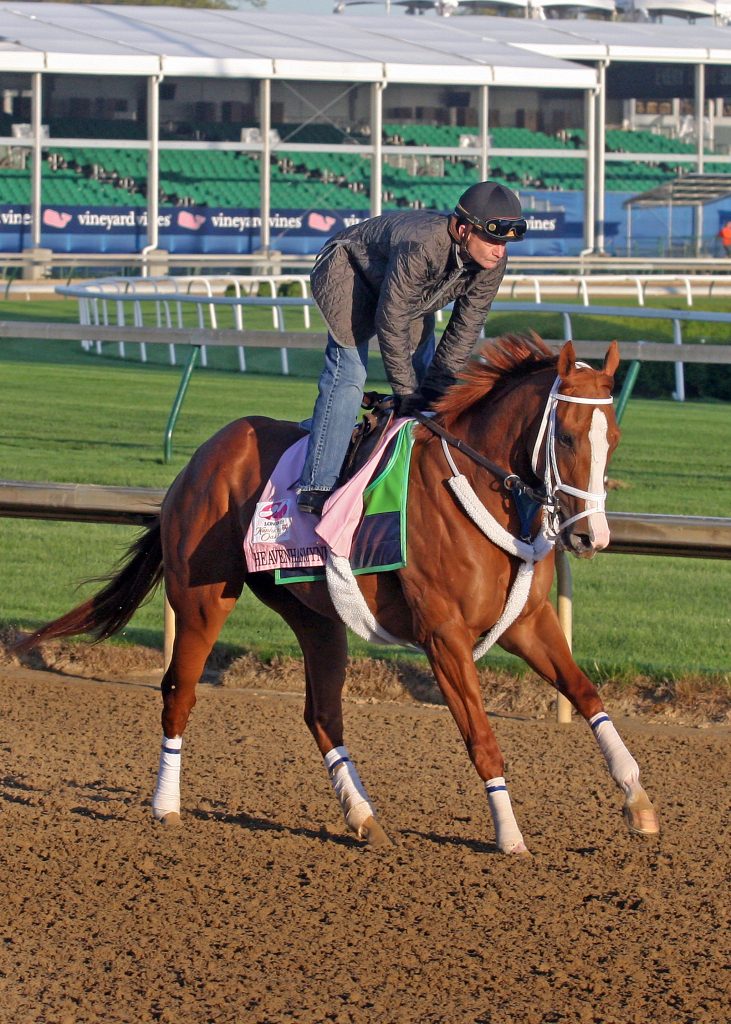 Heavenhasmynikki in training at Churchill Downs

The well-timed ride by Kendrick Carmouche pushed “Nikki’s” career record to 14-7-0-2 with $374,980 in earnings. Campaigned by Ron Paolucci Racing LLC the striking 4-year-old filly is currently under the care of Robert Hess, Jr. She was purchased at the 2016 Fasig-Tipton October Sale. The daughter of Majestic Warrior is out of Floral Park by Forest Wildcat and was bred by Langsem Farm.
The Vagrancy has been a springboard for numerous national champions in multiple divisions. Conniver won the first running under Hall of Fame rider Ted Atkinson in 1948 and went on to be crowned Champion Older Mare. Other champions that won the Vagrancy were Cicada (’59); My Juliet (’76); Sky Beauty (’90); Xtra Heat (’98) and La Verdad (2010). Good company to be in for a filly foaled in Loveland, Ohio.

CARMEL STICKS TO THE RAIL IN GOOEY $75,000 TOMBOY WIN
It is that time of the racing season where horses are asked to test their mettle around two turns. The $75,000 Tomboy Stakes at Belterra Park was also scheduled to give the 3-year-old fillies an opportunity to perform on the turf. The one and one-sixteenth mile test for Ohio Registered fillies was moved from the turf to the Cincinnati dirt after heavy rains in the area turned the track to a sea of mud earlier in the day on May 12. 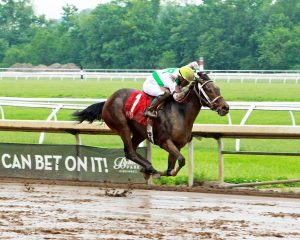 H.F. Carmel was stepping up to stakes competition for the first time in her career. Trained by Mike Rone, he elected to make a rider switch and put Gerardo Corrales up. Corrales, breaking from the rail, made the decision to take the short way home. Patiently handled in seventh for most of the running, H.F. Carmel picked up her cue into the stretch and made a quick move while skimming the rail and seemed to relish the sloppy going to pull away by 4 ¼ lengths at the wire.
The daughter of Revolutionary out of Ohio-bred Flip Side by Devil His Due notched her second career victory and upped her earnings to $73,630 for owner Dr. Harold Fishman. The homebred left the gate at 7-1 odds and was timed in a leisurely 1:47.12. She now has two wins, one second and one third in five lifetime tries.
Gabriel Lagunes guided 25-1 longshot Market Success up for second, while T.D. Houghton was aboard third-place finisher, 6-1 Drillit. Totally Obsessed, at 7-2 odds, was fourth for Luis Quinones. Here Comes Jigs, another Rone-trainee was caught in tight after the start, stumbled and lost jockey Ricardo Feliciano shortly after the start. Both the horse and rider returned unscathed.

$75,000 MICHAEL F. ROWLAND MEMORIAL HANDICAP TO MOBIL SOLUTION
Mobil Solution was recently crowned Ohio’s leading 3-year-old male and Accredited 3-year-old male. In his second start of the season he returned to his winning ways and put forth a solid stretch run to capture the $75,000 Michael F. Rowland Memorial Handicap on Saturday, May 11 at JACK Thistledown. 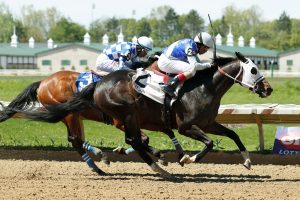 The 4-year-old son of 2018 Ohio Stallion of the Year Mobil, with Luis Rivera in the irons, relaxed in third for the first half of the race and engaged 6-5 pace setting rival Midnight Mikey (Luis Quinones) into the stretch and prevailed by half a length at the wire in the test for Ohio Accredited foals, 3-year-olds and up. Mobil Solution, the 9-2 choice, was clocked in a respectable 1:11.02 for the six furlongs. Breezing home for a fast, hard-fought third-place finish was 2-1 Direct Deceit (John McKee).
Mobil Solution, a dark bay or brown gelding, is trained by Jeff Radosevich for owner Gerald Silver.
Bred by Mapleton Thoroughbreds, the gelded son of Mobil out of Perfect Solution by Seeking the Gold now has $274,020 in his career coffers, with five wins, five seconds and a trio of thirds in 16 lifetime starts. His other stake triumphs include the 2018 editions of the $75,000 Horizon Stakes and $75,000 Catlaunch Stakes, and the $75,000 Joshua Radosevich Memorial Stakes in 2017.