LEGENDARY HORSEMAN AND BASKETBALL STANDOUT JAMES E. MORGAN PASSES AWAY AT 85
Thoroughbred trainer James E. (Jim) Morgan may be the greatest trainers you may have never heard of, with one of the most interesting sports backgrounds. A native of Kentucky, the first horse race he ever witnessed was when Dark Star upset the great Native Dancer in the Kentucky Derby when working part-time as a Andy Fran usher. While born in the bluegrass he made his reputation on the hardwood basketball floors of Dayton, Ohio where the 6-foot-1-all-city guard he led Stivers High School to be ranked #1 in the state in the early 50’s. 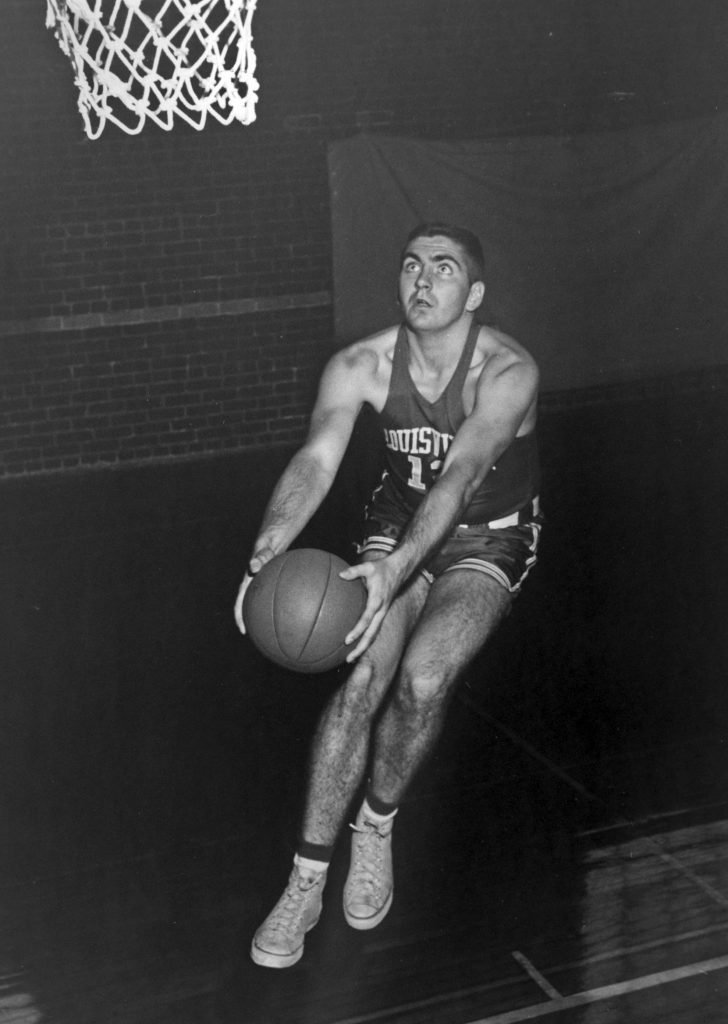 Morgan’s #12 Jersey was retired when he entered the U. of L. Hall of Fame.

He chose the University of Louisville over the University of Dayton and went on to become a standout player. Morgan played on some very good Louisville teams, including the 1956 National Invitation Tournament championship over the University of Dayton. During his career there he became the team captain and amassed 1,105 points.He was inducted into their Hall of Fame and his number retired. The Syracuse Nationals of the NBA (eventually the Philadelphia ‘76ers) made him their #1 draft pick, but he elected to return to Dayton to teach and coach high school basketball at Stebbins High School, as the salaries (believe it or not) were comparable. “Guess I was born a few years early,” Morgan laughed while discussing the subject. “It was just a few years after that NBA salaries started to skyrocket.”

After nine years, Morgan switched to coaching equine athletes and became one of the Midwest’s preeminent thoroughbred trainers winning over 300 stakes races. Based primarily in Kentucky and Ohio, he trained Costly Dream who defeated champion Susan’s Girl in the Berlo Handicap at Aqueduct ; Bold Rendezvous winner of Belmont’s Imperatice Stakes and Brent’s Prince who captured Arlington Park’s Round Table and the Ohio Derby at Thistledown. Morgan trainees won multiple runnings of the La Troienne, Golden Rod and Kentucky Cardinal Stakes at Churchill Downs and the Lafayette Handicap at Keeneland.

Jim Morgan and his longtime assistant Dennis Freking in 2017.