ALTISSIMO CROWNED AS 2018 OHIO HORSE OF THE YEAR

ALTISSIMO IS CROWNED AS 2018 OHIO HORSE OF THE YEAR
Trainer Richard Zielinski outlined the most competitive season of 5-year-old Altissimo’s career in 2018 and his well-planned schedule reaped four stakes victories and two stakes placings for earnings of $320,875 and the Horse of the Year title in Ohio. The Annual Awards Banquet was held on May 17 at the historic Darby Dan Farm in Galloway, Ohio. 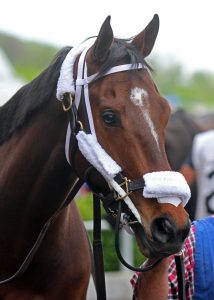 Altissimo crowned “The Best of the Buckeyes.”

Owned by Nancy Lavrich and Ronald Zielinski, the son of Noble Causeway out of Great Goin Gal by Albert the Great was bred by Nancy Lavrich and Niknar Farm LLC. While the bulk of his $519,388 career earnings was earned by racing 6 furlongs, his season started at a mile at Mahoning Valley where he finished fourth after setting the pace. He returned next to face open company at 1 mile and 70 yards and drew off by 6 ¾ lengths. Christian Pilares was in the irons that day and would be his only jockey for the rest of the season.
Altissimo’s next seven starts all came in stakes races, winning five of them. His richest victory came in the $150,000 Best of Ohio Sprint at Thistledown where he drew away from the field by nine lengths over a sloppy track. He closed the season out with back-to-back Beyer Speed figures of 100. Relishing another wet track, he bested two-time Ohio Horse of the Year Mo Dont No by 4 ½ lengths in the Cardinal Handicap at Mahoning Valley.
He forayed out of Ohio for his final start in the $100,000 Dave’s Friend at Laurel. In an impressive effort, he was shuffled back at the start and appeared hopelessly beaten while fifth in the lane. Unleashing a final furlong effort, he rallied to come up a head short at the wire. Altissimo has already returned to his winning ways this season by taking the $75,000 Babst-Memorial at Belterra. Asked about his 2019 campaign, Zielinski replied, “I guess we’ll stick to the same schedule we had last year.” 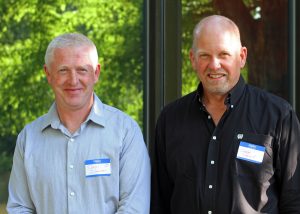 Owner of the Year
Ron Paolucci