2020 GRADE 3 OHIO DERBY – FROM CLAIM TO FAME FOR THE KING OF COOL
With the national reshuffling of Kentucky Derby, Thistledown inherited a Derby points race in the Grade 3, $500,000 Ohio Derby this year. The chance for Derby points and a share of Ohio’s highest purse attracted an aspiring field of 13 starters in the 1 1/8 mile race. Included in the large group was last season’s 2-year-old champion Storm the Court. He had yet to repeat his form as a 3-year-old and trainer Peter Eurton enjoyed his rare visit to Thistledown when he captured this race in 2018 with Core Beliefs. 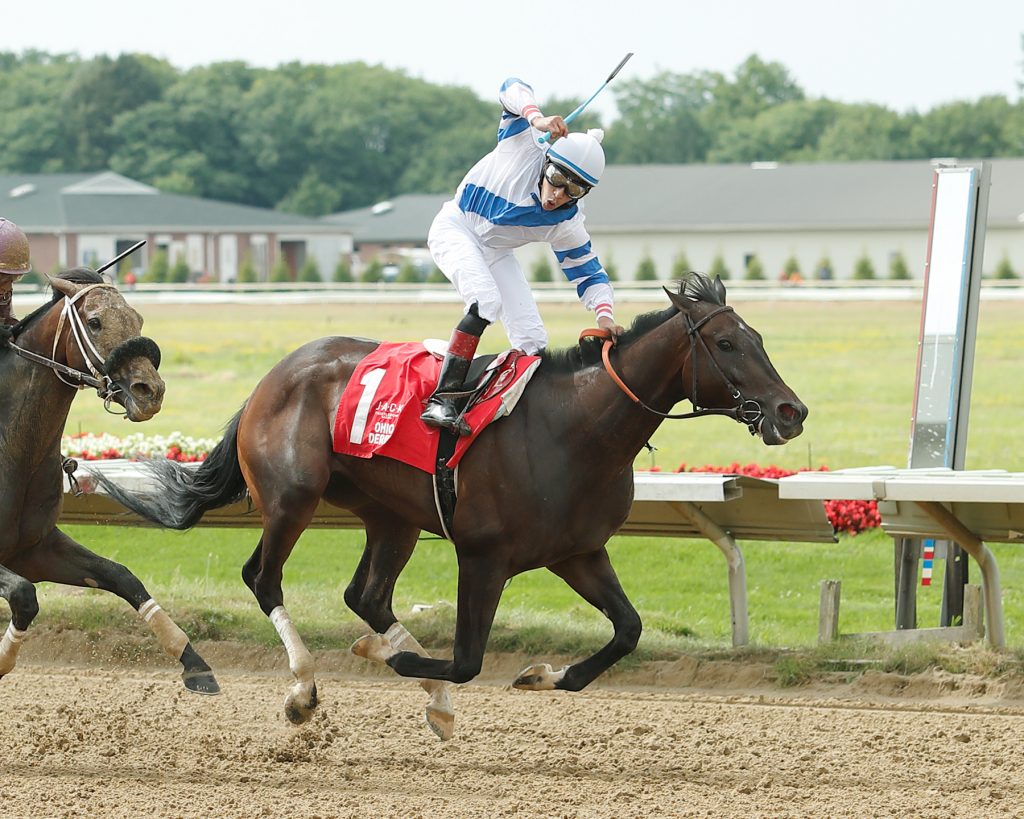 The eventual upset winner was named in part after a beloved Ohioan – Dino Crocetti, who grew up in Steubenville. Known nationally as “The King of Cool”, the son of Italian immigrants moved west and changed his name to Dean Martin…and the legend began. His equine namesake is Dean Martini and one race after moving to a new barn, the maiden gelding became a graded stakes winner. Originally sold at the Keeneland September Sale for $220,000, he ran exclusively in maiden special weight races at five different tracks from Kentucky to California.
Finally dropped into a $50,000 claiming race at Churchill Downs in May by trainer Brad Cox, he won in hand, but was claimed by the keen-eyed Tom Amoss for owner Raise the BAR Racing LLC. Amoss had the son of Cairo Prince gelded and he put in a strong second-place finish in his next outing at Churchill Downs. With no rider named at time of entry, Ricardo Mejias got the call and Dean Martini drew the inside post.
Mejias rode a perfect race. Breaking well astride the 14-1 shot, he kept him with the pacesetters to prevent being surrounded by the calvary of competitors and saved ground along the rail and let his mount drop back to fifth at the midpoint of the race. Holding his position, he quickly slipped past the leaders and was on top by three lengths in midstretch. Storm the Court, with blinkers off, launched a solid rally, but South Bend finished stronger in the final 40 yards. Dean Martini held sway by ¾ lengths, with South Bend two in front of Storm the Court.
With 9 defections from the leaderboard for the Kentucky Derby already. Dean Martini is currently tied with Candy Tycoon for the 20th position according to the points system. It will be interesting to see what path Tom Amoss takes with the new stable addition to get into the starting gate on the first Saturday in September. He will be hoping that minutes after hearing “My Old Kentucky Home,” he will be singing with Raise the BAR Racing – “Everybody Loves Somebody Sometime.”

CLEVELAND GOLD CUP
It’s that time of the season when horses are asked to stretch their abilities from sprints to distances. Last season’s top 2-year-old male Liberate had already proven he could stretch out when he captured the $150,000 Best of Ohio to cap off his five-win season with three stakes victories. In his last start this year, he defeated older, open company at 5 ½ furlongs. The $226,360 earner was backed down to 2 to 5 favoritism in the field of seven who would travel 1 1/8 miles in the Cleveland Gold Cup. 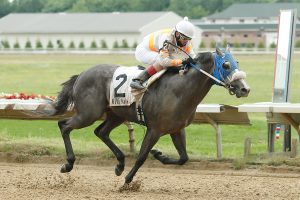 As expected, Liberate went right to the front under Gerardo Corrales, but two-time stakes winner Betchaiwill and jockey John McKee were not about him to dictate the pace and made a quick move to take a short lead after the first turn and set the pace to the far turn. Liberate drew on even terms into the stretch and it looked like it would be a two-horse run to the finish.

Chief Randel, who had settled in behind the top two and made a determined move three-wide in the lane to edge to the front and eventually pull away at the wire by 2 ¾ lengths. Liberate held second by 7 ½ lengths over Betchaiwill. The winner travelled the 9 furlongs in 1:54.22. The 3-year-old gray colt was dismissed at odds of 23 to 1 and returned $49.80 to win. 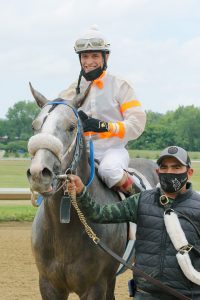 Augustin Bracho was aboard Chief Randel for the race, but there was an anxious moment in the gate as he was bucked off previous to the start. It was the second win of the season for trainer Jose A, Romero. Chief Randel was bred in Ohio by Harry D. Waite & Ronald D. Waite, he is owned by Harry Waite. He is by Fibre Sonde out of She Could Be Good by Daylight Savings. Fibre Sonde is an unraced son of Unbridled’s Song who stands in West Virginia. The win in the Gold Cup pushed Chief Randel’s earnings to $94,500.