COME OUT TO THE RACES SATURDAY FOR THE OHIO DERBY GRADE III $500,000 EVENT DRAWS FULL FIELD INCLUDING CHAMPION STORM THE COURT
The Ohio Derby has a new twist this year and will offer Points for the Kentucky Derby on a 20-8-4-2- scale. With that facts and the lucrative $500,000 purse, an overflow field will fill the starting gate in a rare Saturday live program at Thistledown. The race has attracted last season’s 2-year-old champion Storm the Court, who is shopping for his first win of the season after competing in three graded stakes races. Thistledown holds a special place in the heart of trainer Peter Eurton, who travelled from his west coast base to win this race with Core Beliefs two years ago. Eurton elected to remove the blinkers from his Breeders Cup Juvenile winner after he recorded a bullet work on June 20 at Santa Anita. Flavian Prat, his regular rider will be aboard. 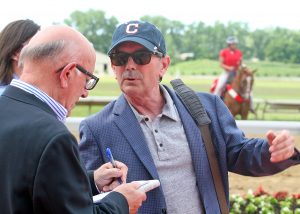 The ban on fan attendance at the races in Ohio has been lifted and according to Director of Racing Patrick Ellsworth things are going quite smoothly. “While the wearing of masks is recommended for racegoers, it is not mandatory as it is for all of our personnel on the backstretch and working at the facility. We recommend social distancing and have spacing markers for the betting windows and everyone is adhering to the practices. We have not had one single incident, everyone has been so accommodating.”
Ellsworth credits new Racing Secretary Hugh Drexler for attracting top racing outfits to the field. The list of trainers who will be coming in for the race include Hall of Famers Bill Mott, Steve Asmussen and Todd Pletcher. Other nationally recognized conditioners include Dale Romans, Tom Amoss, Stanley Hough and Michael Stidham.
The race previous to the Ohio Derby will be the $75,000 Daniel Stearns Gold Cup for 3-year-old Ohio-breds. It is headed by last seasons standout Juvenile Liberate. The Tim Hamm trainee won 4 of 5 starts in 2019 and three of those races were stakes events that accounted for $206,250 in earnings. In his last start he defeated older horses over the Thistledown strip. The Gemologist gelding is owned by his breeders Winstar Farm LLC and Blazing Meadows Farm. Post time for the first of nine races is 12:20 p.m.

PERRY OUZTS – YOU CAN’T KEEP A GOOD MAN DOWN -SCORES FIVE WINS IN A DAY
Like the Energizer Bunny, veteran jockey Perry Ouzts keeps going and going and going. It was just under a year ago that he took a spill and was sidelined from what he loves best – winning races. At first it was believed that he had suffered a dislocated shoulder and his recovery time would be brief, as it has been so many times over his career. In a visit to the Doctor for clearance to ride it was discovered that he had torn his rotator cuff, an injury that would require surgery and months of therapy.

In his first mount back at Belterra Park on June 4, riding Golden Ready for top trainer and friend Larry Smith, he did what he has done for most of his riding career – go to the front and stay there. On Thursday the 25th he won with five of his seven mounts on the day. The wins included a natural hat trick in races two through four, and a late double in races six and seven. Since his first win aboard a horse named Rablue at Beulah Park on April 2, 1973, the native of Lepanto, Arkansas has hit the finish line first an amazing 7,076 times!
With those victories from 51,283 mounts, Ouzts has more career wins than any other active jockey in North America. He ranks seventh all-time behind Russell Baze (12,842), Laffit Pincay Jr. (9,530), William Shoemaker (8,833), Pat Day (8,803), David Gall (7,396) and Chris McCarron (7,141).
Thursday’s five wins came for five different trainers: Chris Hartman (Quiet Dawn, Race 2, $3.40); Susan Anderson (Drama Run, Race 3, $19.20); Doug Goodman (My Pal Dal, Race 4, $56.40); Robert Gorham (Northern Journey, Race 6, $2.60); and Barbara Riley (Aiken for Gold, Race 7, $4.00)
During his lengthy career he has been told by doctors on several occasions that he would never ride again. He continues to defy the odds. He was the centerpiece of an Eclipse-Award winning documentary called “Ironman: Perry Ouzts.” Produced by the Hennegan Brothers, the final question he was asked was “How long do you intend to ride?” His response was, “I’m going to ride this train until they throw me off.” It is good to see that train is still running with him aboard.
“Ironman: Perry Ouzts” is available for viewing on You Tube.