OHIO RACING IS OPEN FOR BUSINESS
Through tireless efforts by the Ohio H.B.P.A. and the Ohio Racing Commission, racing returned to the Buckeye State on June 4. While the races were contested spectatorless, that very day Governor DeWine announced that casinos/racinos would be open two weeks later on June 19. Of course, strict Covid-19 precautions will be in place at all facilities.

With few exceptions, the tracks will race weekdays, with Belterra racing Tuesday through Friday and Thistledown running Monday through Thursday. Both tracks will run on Kentucky Derby Day, Saturday, September 5. Thistledown will also race on June 27 when they present the now, Kentucky-Derby points eligible, $500,000 Grade III Ohio Derby Presented by TwinSpires.com. The $75,000 Daniel Stearns Gold Cup for Ohio registered 3-Year-olds will race on the undercard. The Cleveland-area oval will also play host to the 5-race Best of Ohio Series on Saturday August 8, where each race will have a $100,000 purse.
Belterra Park will race until Friday, October 9 and closing day at Thistledown is Wednesday, October 21.

BUCKEYE BULLET HITS THE MARK IN THE MICHAEL F. ROWLAND MEMORIAL FOR THE THIRD TIME
Horses have been known to favor certain surfaces and distances and you can find examples in certain state programs where horses will repeat a winning performance in a certain stakes event. Winning a stake three times is very rare, but the way Ruberto Racing Stables homebred Buckeye Bullet did it in the $75,000 Michael F. Rowland Memorial Handicap is unheard of. The last time the son of Dark Kestrel scored in this race was the last time he ran – two years ago!
The very fast gelding was sidelined after his victory in 2018. Trainer Luis Ruberto Jr. patiently awaited for his horse to let Mother Nature and Father Time allow Buckeye Bullet to regain his fitness. Ruberto brought him along with a methodical series of workouts leading up to his return. The telltale sign that he was fit and ready to roll off his lengthy layoff was his 3 furlong workout in :36 flat, out of the gate over a muddy Mountaineer Park strip. 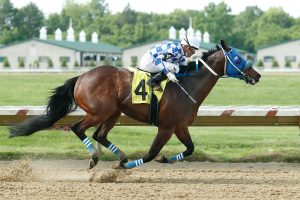 Buckeye Bullet made his return to the races a winning one. Photo: Jeff Zamaiko

A very evenly matched and talented field of twelve Accredited Ohio-breds entered the Thistledown starting gate, including Buckeye Bullet’s 5-year-old full brother, Midnight Mikey, who was installed as the tepid favorite. When the gates opened jockey Erik Barbaran put his mount in a familiar position – on the lead. Jockey John McKee sent the 3-year-old multiple stakes winner Betchaiwill right out alongside the speedster and they raced heads apart. In the heat of the action, Buckeye Bullet bumped his rival repeatedly down the backstretch. The fight continued stride for stride until they were in the final furlong and the veteran gelding slowly inched away to shake clear for a two-length victory over Betchaiwill, who was 2 ½ lengths clear of Mobil Solution winner of the Rowland last year.
The 7-year-old multiple champion mare Leona’s Reward elected to take on the boys for her seasonal debut and ran an even 4th. After she closed out her 2019 season, winning 3 of 4 stakes starts, trainer Tim Hamm was asked if she would be retired and replied, “As long as she is feeing good and training well (she recorded two bullet works at Tampa Bay Downs recently) we will go on with her, she deserves to go out a millionaire and we will keep her in accredited company.” She currently has a bankroll of $937,806.
The well-rested Buckeye Bullet now has a record of 9-3-2 from 17 starts and has earnings of $293,099. He and Midnight Mikey are by the Ohio stallion Dark Kestrel out of the Concetro mare Buckler. They were bred by Mr. and Mrs. Luis V. Ruberto, Luis is the trainer of both geldings. Favored Midnight Mikey had to break from post position 11 and was bumped at the start, chased the top two and faded to sixth.
GALLOPING OUT: Conspicuous by his absence was Luis Quinones who is the regular rider for both siblings. America’s second-leading rider by races won in 2019 and winner of the 2020 George Woolf Award was involved in a spill only two days prior to the Rowland at Mountaineer Park. Taken to St. Elizabeth Youngstown Hospital it appeared initially that he had broken his pelvis. After further diagnosis it is believed he has a deeply bruised pelvis and a fracture in his hip.
“Talk about insult to injury,” said Quinones’ agent Billy Johnson. “He has been riding Buckeye Bullet since 2016 exclusively. He loves that horse and was thrilled to be part of his comeback story. He would travel wherever he had just to work him out and he was very excited about riding him. It looks like they are going to let him stay in the hospital to start his therapy which is good and eliminate the need for him to travel back and forth.” Our thoughts and prayers are with him.
*******************************************************************
It’s a brand new world out there on a lot of levels. There are many questions about registering you horses and the proper steps to acquire your digital Certificates. We hope this helps and you are free to contact Lori directly.
For an instructional video regarding Digital Certificates, please visit http://bit.ly/tjcdigitalcerts