Jack Thistledown Racino hosted another tremendous showcase for Ohio Racing with Five $100,000 Best of Ohio Stakes on Saturday August 14th. Under beautiful sunny skies racing fans were treated to 5 great races full of excitement, objections, and long shot winners. There were no winning favorites in any of the 5 stakes!

Thedayofthegrey and jockey Sonny Leon started the day off with a $20 wire to wire upset of the favored Winstar/Winblaze trio in the Kindergarten Stakes. The grey son of Twinspired out of the Proud Citizen mare Sharon’s Way was bred by Robert Wilkinson who along with trainer Robert Kline also owns the winner. Tantrum finished 1 3/4 lengths behind in second and 1 length ahead of Rumble Strip Ron.

Pacific Coast exacted a measure of revenge when she took down the Miss Ohio Stakes for her breeders and owners Winstar Farm and Blazing Meadows Farm. Tim Hamm trained the chestnut filly by Exaggerator out of the Indian Ocean mare Ocean Princess. Ridden by Jose Bracho, Jr. she pulled away to a 6 1/2 length victory over Candlelight Hours who headed Flatter Her Again for second.

Circus Rings repeated in the Pay the Man Stakes with a hard fought stretch run that put her a head in front of Sally Strong and a length in front of Market Success. Close to the lead throughout, the dark bay or brown mare bred by Mike and Penny Lauer by Wilburn out of the Petionville mare Ring Ring Ring, gutted out the victory for her owner Knights A to Z Racing and trainer Valerie Shanyfelt. Just like last year, there was an objection (lodged by the second and third place horses) but this year it was disallowed. 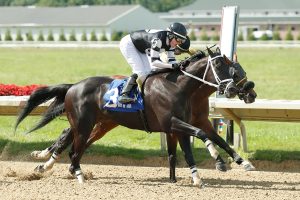 Magna Man was simply magnificent in winning a thrilling stretch battle against the multiple stakes winning forewarned in the Governor’s Buckeye. Ridden by Chelsey Keiser for owner/breeder Ron Treadway and John Hoctel, the Ivan Vazquez 8 yr old trainee ran the race of his life coming back after being passed to notch the victory and pay $29.20. I Wanna Win checked in third. 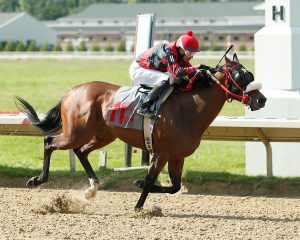 Dougie D’Oro finished off the Stake Races by capturing the Honey Jay with a convincing 2 3/4 length victory over Nick Can Fix with Liberate checkig in 3/4 lengths further back in 3rd. The dark bay gelding bred by Doug Shanyfelt is by Mio d’Oro out of the Hold that Tiger mare Do The Tiger. He is owned and trained by Jerry Sparks and was ridden to victory by Ricardo Feliciano.

The Best of Ohio card represented all that is great about Ohio racing. Exciting horses, stirring competition, the opportunity to make serious money, and above all a fantastic and entertaining day. Hats off to the staff at Thistledown and the OTBO for all that was done to make the day more enjoyable.

Congratulations to all the winning connections!